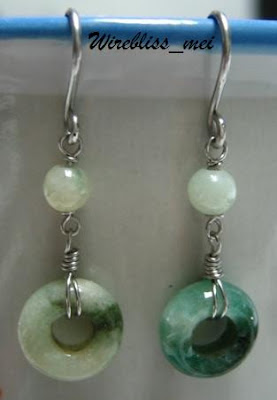 JADE, another one of my favorite gemstones, are most often green. However, it can come in a variety of colors. According to Chinese belief, jade provide protection to the wearer. There are many stories (which I heard since I was young) whereby one is believed to have been saved by the jade in an accident when the piece that was worn broke into pieces. If not for the jade, the consequences would have been worst. As such, it is believed that jade absorbed some of the bad luck.

Today jade is still valued for its beauty. This pair of earrings is made for a co-worker. The donuts are about 1.3cm in diameter. The wire wrap technique is based on my observation of some of the pieces I found in the web. Took me about 30 minutes to complete this piece.

Further articles on jade can be found at Gem and Gem and Wikipedia.

Email ThisBlogThis!Share to TwitterShare to FacebookShare to Pinterest
Labels: Earrings