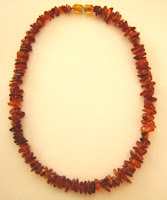 Rachel has an amber necklace that she received as a gift from her grandma who lives in . The string broke off when she was on holiday in so I got it stringed back when she came back. She lost some of them but the remaining amber were enough to fit her tiny neck. She and her mom told me about a lady in who has a whole house full of amber. Unbelievable but this lady has been collecting amber from the beach / seaside near her house. Imagine taking a morning walk a the beach and at the same time collecting amber just like collecting sea shells. WOW! But that was many years ago according to the lady.

That got me interested in amber. First of all, amber is the production of fossilized tree sap of certain tree species believed to be extinct. Because of its origin, amber comes in different colors and is often opaque due to impurities that mixed naturally with the ancient sap. The Baltic coast of is most famous source of the world’s amber. Other places with rich deposits also include , the and the state of . There are so much fake ambers around today that when you purchase one, you are not even sure if it is real or fake. Many of these are believed to be coming from . I have come across a vendor who actually told me that the amber he is selling is a fake. Asked where the origin is, he said it is “from ”. I am sure besides , there are other places producing fake ambers. That aside, amber is still sought after by fans for its decorative value and for the ancient, once living organisms that it preserves. Small insects, leaves, flowers and small animals are frequently found in amber. Often these trapped organisms are extinct species dating back million of year. What a discovery if I can get hold of one of them…..I am only wishing! For scientists, this present an opportunity for studying the species in detail as the preservative qualities in amber keeps the DNA of the trapped species intact. Amber symbolizes longevity. Beads, pendants and other jewelry have been discovered in burial grounds as early as 15,000 years before Christ. More readings on amber here.