Less than 7 hours to go.
Goodbye 2009 and Hello 2010
A Huge thank you and a Happy New Year to all readers.
New year, new hope, new resolutions, new goals, new dreams, new to do (ok! some old to do :D), new projects, new wishes, new....oh...this is an endless list. Better not list them all because I have a feeling they will be old/new in 2011.
2009 generally was a good year for me and I hope 2010 would be a much much much much better one.
So, here's saying goodbye to 2009 and welcoming 2010 with my wide open arms and a wire wrapped Seahorse!
The letter "S" at the center is not for "Seahorse", it's the initial of the new owner :) 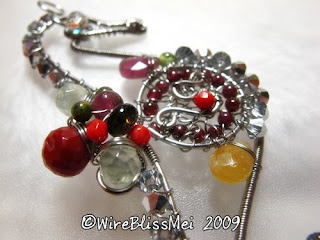 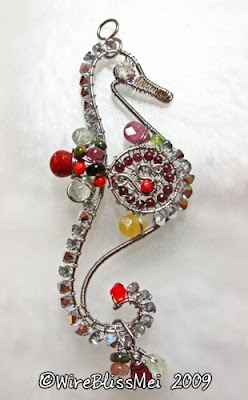 According to Wikipedia, the seahorse has long been a sign of eternal friendship in Hawaiian culture. Somewhere else mentioned it represents confidence and grace. Here's a detail post by Avia on the symbolic meanings of seahorse. This is interesting and new to me "A unique aspect of the seahorse is that the male is impregnated by the female and carries the offspring to term". If only human can do that...LOL.
I hope to have all the Seahorse's symbolic meanings in year 2010.
Enjoy and Have a Very Happy New Year 2010.